Ground acquisition.
And that’s what football is, football’s a ground acquisition game.
You knock the crap out of eleven guys and take their land away from them.
Of course, we only do it ten yards at a time.
That’s the way we did it with the Indians — we won it little by little.
First down in Ohio — Midwest to go!
— George Carlin 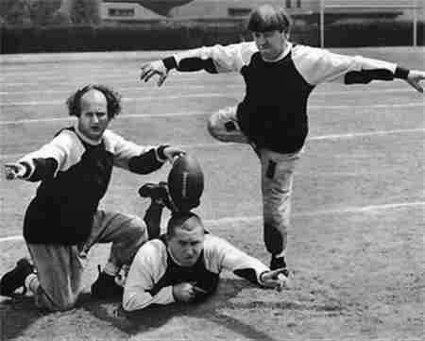 Genocide of US native peoples was/is no game.
And today, the accumulation of such a media frenzy creates a shame there’s no real merit orÂ even worth in the entire enterprise — this has got to be one of the most-dumbest days of the year, created for a way-low common denominator amongst dumb-ass Americans.
Of course, for my liquor store Superbowl Sunday is a financial way-uptick in the down-days of winter — in fact, this weekend will be the best we’ll see until Spring Break, or until the weather gets warmer, which ever comes first — plus the event comes on the heels of ‘the first,’ when not-only poor peoples, but all financial/situational peoples get ‘checks,’ either from state/federal governments, or insurance companies, pension funds, a dozen other institutions.
If the 49ers had made the game, sales would really have gone out the roof, but…

And, of course, when I express my total disregard for the “Big Game,” and don’t even know the teams involved, I’m viewed as a freak — people are put on a momentary pause, and you can actually see confusion wash across their faces as they cannot comprehend such crazy talk.
A ‘secular high holy day‘ as the ABC news guy says this morning — freaks, dude, nothing but freaks.
And I ain’t the only one — this from Gawker for other things to do on Stupid Bowl Sunday:

The great thing about the Super Bowl is that 100 million heathens are placed on their fat asses on their couches with a beer in one hand, the remote in the other, tortilla chip crumbs all over their shirt, and a stain from some taco dip on their upper lip.
Yes, everyone I hate is watching the Stupid Bowl, that means it’s my time to play.

One would surely hope that’s a cultural caricature, a TV sit-com image of the Super Bowl watcher, not reality, but alas, most-likely not far off the mark — as shown by store patrons before, during and after the game.
Not a pretty sight.

The Gawker post also listed other shit to do during the big game, especially like going to the movies and or taking in a popular restaurant, where there’d be almost no lines or other patrons (100-million fat-ass heathens on the couch at home, remember), or read a book.
Or maybe just take time to be alone — a way-shitload of people have a lot of trouble spending time alone with themselves — and what better time to do it when millions of other people will be joined at the ass for one giant bowel movement.