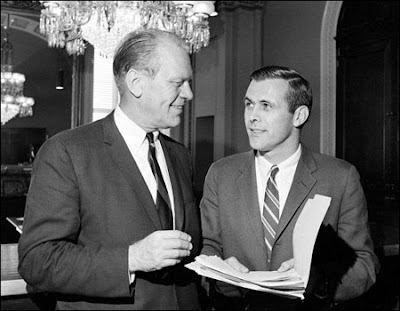 Odd is history.
What little of history I’ve seen, one truism for sure is that history does repeat itself — what comes around goes around.
People who’ve had a strong hand in developing parts-and-parcel the world’s current shit-storm also enjoyed a role in events past — revealing a character study in nasty, carry-a-big-stick-and-use-it warmongering.

Even in advanced age for some, there appears no remorse.

And history in its tilted angle can produce extremely bad timing.
On April 30, 1975, Saigon finally fell to North Vietnamese forces — the last stage in iconic-photographed US Operation Frequent Wind, creating what then-president Gerald Ford called a “humiliating withdrawal” — less than two weeks later, came the Mayaguez Incident, in which US prestige played a bigger role than US military servicemen.
In short, the Mayaguez was a cargo ship in employ of Sea-Land Services for the US military in Southeast Asia and was in the Gulf of Siam when she was captured by Khmer Rouge naval forces in what Ford blubbered out as an “act of piracy.”
The ship and crew were rescued unharmed after a military operation — more to show US resolve and muscle than anything else — that left 41 total dead and missing (18 Marines and Airmen killed in action/missing in action. 23 Marines killed in a helicopter crash during the operation. 50 wounded).

Details of the nearly-forgotten incident were part of a documents dump Friday by the US Department of State.

AnÂ Associated Press story (from Saturday via antiwar.com) covers some of the dialogue among Ford’s advisers on how to react to the situation — Henry Kissinger, the secretary of state, Nelson Rockefeller, the vice president, wanted some heavy military action — while no one wanted to hear William Clements, the deputy secretary of defense, as he presented a case that the US shouldn’t be so paranoid: the incident might not be intended as a challenge to the U.S. but rather a misstep linked to a dispute over oil resources in the region.

“We should not forget that there is a real chance that this is an in-house spat,” Clements said.
“That is interesting, but it does not solve our problem,” Ford responded.
He called for a U.S. Navy aircraft carrier to head toward the scene and for plans to be drawn up for laying mines in the waters around the seized ship.

Further down in the AP story, near the end of the discussion on the US response to the Khmer Rouge, is this graph:

Donald H. Rumsfeld, the White House chief of staff who later that year became Ford’s secretary of defense, suggested a public statement declaring the ship’s seizure an act of piracy and saying the U.S. expects the crew’s release.
He argued against demanding their release â€” because, he said, that would “activate the Congress” and “seems weaker.”

The Rumsfeld two-cents worth.
He would later contribute way-more than a $3 bill.

And he will be hated by all stripes: So here stands the secretary of defense, long and widely despised by officers for rejecting their advice before the war and now openly criticized by the grunts for failing to give them proper cover as the war rages on all around them. And yet Rumsfeld is the one Cabinet secretary who has received explicit assurances that he will keep his job, with President Bush’s full confidence, into the second term.

And the last graph from aÂ New York Times review of Bradley Graham’sÂ  book, “By His Own Rules : The Ambitions, Successes, and Ultimate Failures of Donald Rumsfeld:”

On the day of Mr. Rumsfeldâ€™s farewell ceremony in December 2006, Mr. Graham writes, â€œthe tally of U.S. troops who had died in the Iraq war had reached 2,939,â€ the â€œnumber wounded in action had exceeded 22,000,â€ and â€œcountless others were mentally and emotionally traumatized from the nightmarish conflict.â€

Rummy’s known by what’s he known.