On the weekends, my blogging window-of-performance-opportunity is kind of whacked. During the ‘work week’ its early and quick, but Saturday and Sunday presents a longer, more-lazy approach to venting my writing obsession (blogs are a most delightful means to maintain writing, the whole Internet, really — I’ve been writing near-serious in all different kinds of ways since about the age of 12 or so [50 years or so] and this blog is much-like when I wrote as a kid. Junk out a short story or poem, then eventually, or maybe quickly, assign it to a big cardboard box containing all shapes of literary artifacts in various stages of completion. This blog is similar as so few eyes read it, the entire contents could most-easily be transferred to that weighty box in my teen-age bedroom) and what could be written in an hours, takes sometimes all day Saturday.

In that sphere of influence, I’m going to see what the big news is today, maybe get pissed off and depressed all at once — it’s become fairly apparent the earth is moving toward some heavy-duty cataclysmic event/events in the extreme-near future, and of course, the US has the torturous midterm elections this Tuesday, which could reveal the upcoming violent underbelly of American war, politics and life. 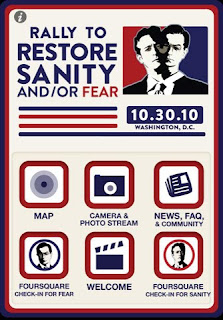 And to demonstrateÂ the upside down life/reality: The US has as its “most trusted” journalist, Jon Stewart, host of The Daily Show, a mock TV news program, who with his nefarious alter-ego, the mocking Stephen Colbert, holding the massive Rally to Restore Sanity And/Or Fear today in DC — Watch the whole thing here — and what’s near-implausible, the event might effect the neurotic US election in three days.
Talking Points Memo, which is usually dead on the weekends, has been carrying some good descriptions of the event from all sources, from iPhones to Tweeter.
And as one reader shared: They were really unprepared for the size of the crowd. No secondary speakers or jumbotrons set up...It’s insane down here.
Knew it!

When I first heard of Stewart’s rally, I felt certain the thing would be enormous and would make last summer’s Palin/Beck grotesque day on the Mall tiny, weeny in comparison — hopefully, the vast number of Americans have sense and will get-in/be-in on the joke.
Many of TPM‘s readers seemingly reflect similar views as this one, a telling detail: My 5 yo and I just bailed because of crazy metro issues, but I can tell you that we were on a train near packed with boomers and older. And they were more excited than anyone else–giddy, even. Definitely an all ages event.
A fun event to keep up with all day, and not surprising, an uplift kind of thing, not so sordid and dispiriting as other shit nowadays.

More later, as I gotta run some weekend-type errands.