Chump change: A trivial sum of money, a trivial matter.
For example, Dave was sick of working for chump change, he wanted a decent salary, or, ‘Don’t put that on the agenda, it’s chump change.’
This expression uses chump in the sense of “a fool or sucker who should be ignored.”
[Slang; 1960s] Also see chicken feed. 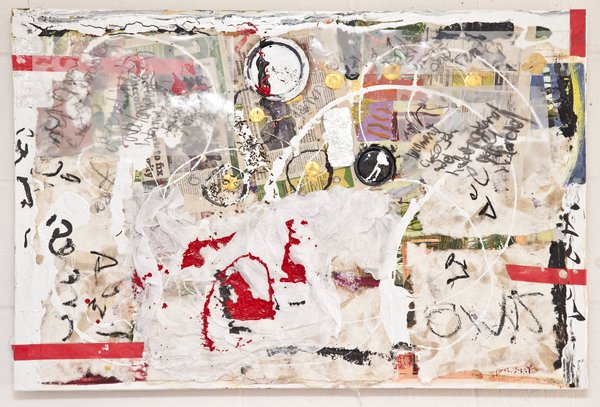 (Illustration/artwork by Michael Katz — “impressions of the scene” at Zuccotti Park — found here).

One’s finances is one’s living.
A big chunk of regular customers using the liquor store I manage most-obviously aren’t living at any kind of high standard — in the last six months coin usage has way-accelerated; more people digging for money, paying not just for newspapers, candy and such with coins, but it’s fairly-normal now for a guy making a $10 transaction or more using nothing but quarters, dimes, nickels and piss-ant pennies.
Business is okay, but that’s a referenced ‘new normal‘ okay — we cratered three years ago, business quickly nose-dived to a certain point where we’ve stayed since — but still able to pay the bills, but not much else.

A lot of US peoples, though, can’t pay the bills, or maybe just barely.
Despite some economic signs some kind of recovery is in progress, the upswing is either way-too-slow for most people, or there ain’t one — even from a new system of analyzing financial information, “…data indicate that Americans continue to experience everyday financial stress despite better job prospects.”
Hence, all the penny rolls.

And from the looks of some of our customers — and the appearance of an average US person — this problem coupled with the knowledge of an enormous income/financial inequality in this country and the world increases poorer health for the poorer people — just a slight inequality rise and our liquor store patron’s cumulative risk of death increases 112 percent in the next 12 years.
So the popularity of Barton vodka — $2.13 out-the-door for a half-pint.
Root of all evil, reportedly, is money — but not really the actual money itself, but the bad shit is infected by either the bad-lack of it, or the desire for way-way-more of it.

And people who manage money — bankers — are on appearance and habit, a more-than-a-bit on the nefarious side.
These who deal in real chump change.

From CNN on JP Morgan’s $2 billion loss in less than six weeks off this “unique thing we did“ wrapped in vaporous financial fog:

The loss is bad enough that the bank felt compelled to hold an after-hours conference call Thursday with reporters and industry analysts.
CEO Jamie Dimon, who was extremely agitated on the call, said the losses were caused by “errors,” “sloppiness” and “bad judgment.”
But Dimon was quick to defend JPMorgan’s overall track record: “When you look at all the things we’ve done, we’ve been very careful.
And we’ve been quite successful.
This obviously wasn’t.”
Should the loss stay in the $2 billion range, JPMorgan will likely emerge relatively unscathed.
The chief investment office’s portfolio has registered gains of $1 billion in other areas, and Dimon said that even after the loss, the bank’s overall profit should be in the $4 billion range this quarter.

Such bullshit spattered with something like this today here in California: â€œWe are now facing a $16 billion hole, not the $9 billion we thought in January,â€ Mr. Brown said. â€œThis means we will have to go much further and make cuts far greater than I asked for at the beginning of the year.â€

Mr. Brown’s first name is Jerry.
And he’s one boy who’s been around long enough to play the pitfalls like a well-heeled trouper.

Next month, California will vote on Proposition 29, hitched to a tobacco tax — we already pay $.87 tax on a pack of cigarettes and the 29 will pop it up to $1 — but the real downside: Two of the nation’s largest tobacco companies â€” Philip Morris USA and R.J. Reynolds Tobacco Co. â€” and their affiliates have spent more than $30 million against the initiative thus far, dwarfing the $4 million raised by proponents.
Our store cigarette vendors hate 29 — prices for even generic smokes are sky high and $1 more is a $1 more, a cut into business.
Just like a lot of other things, the new tax increase will only make a shitload of our sad, coin-only customers switch to cheap-ass pipe tobacco to roll up as cigarettes.

The JP Morgan financial creep-out is another of those hard-to-grasp money deals where there’s not any real, actual money involved, not anything really at all, but computer paper.
Accordingly, JP Morgan made a real-bad bet on a very obscure corner of the derivatives market, a place I really don’t understand, and neither do a lot of other seemingly-knowledgeable folks, like this guy from Forbes: In my conversations Friday with reporters from Smart Money and the Boston Globe, I could not answer a basic question: What happened?
If you can’t who the f*ck can?

All this Wall Street horse-shit, however, has an affect/effect on all of us, down to the poor clown buying a High Gravity 40-ounser.
Matt Taibbi at Rolling Stone in a piece on Wall Street non-regulations and how the reform-mindedÂ Dodd-Frank law was choked by bankers and politics, explains the negative trickle down of this vaporous trading in derivatives:

All of these derivatives issues are oppressively dull and technical, and it’s extremely difficult for most people to imagine how something like Jim Himes’ exemption for foreign affiliates can actually affect their daily lives.
But having an unregulated market instead of a regulated one might mean you’ll pay an extra 50 cents for every gallon of gas (or possibly more, even according to Goldman Sachs).
Or you might have to pay hundreds or thousands more in taxes every year because your town or county or country, if you happen to live in Greece, grossly overpaid an investment bank when it borrowed money.
An unregulated derivatives market essentially gives Wall Street a way to place hidden taxes on everything in the world.

And the only change a-coming is from the chump buying a bottle of cheap vodka.