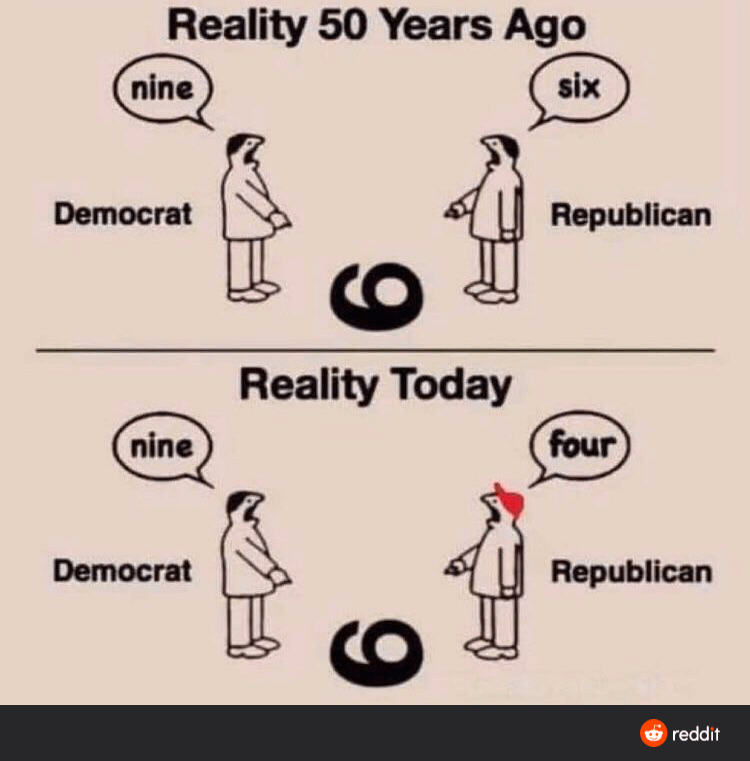 Although the T-Rump is the asshole who let the proverbial horse out of the reality barn, the Republican party has been slipping the bonds of crazy for decades, made-more intense by Sarah Palin and then gushed-forth with the MAGA hatters. GQPers in Congress blather lies and bullshit because they know the base either doesn’t give a shit, or are too dumb to know better.
And reality is a no-no for the GQP.
Steve Benen, political writer and a producer of the Rachel Maddow Show, wrote about the ‘bonkers’ T-Rump at MSNBC this morning:

One of the earliest signs came in early February. Donald Trump and his team issued assorted written statements and legal filings which went to comedic lengths to avoid use of the phrase “former president” — suggesting the Republican believed he was still the rightful leader, despite having been rejected by his country’s electorate.

Two months later, Trump sounded like a politician who believed it was still possible his defeat would be reversed and he’d be welcomed back into the White House. Soon after, the former president reportedly told associates he believed Arizona’s indefensible election audit “could undo” the 2020 presidential election.

Last week, he celebrated a poll showing most Republican voters “believe Donald Trump is the true president,” and this week, the New York Times’ Maggie Haberman noted that Trump “has been telling a number of people he’s in contact with that he expects he will get reinstated” to the presidency by August.
…
Last night, CNN ran a related piece, reporting that Trump has “been asking advisers in recent weeks if he could somehow reassume the presidency this year after listening to farfetched suggestions from conservative commentators and allies.”

A former Trump adviser added that the former president has been listening to “the bottom of the bottom of the crazies in the barrel.”
…
Rather, the concern is that Trump is deliberately undermining our democracy; few in his party are willing to tell him this is dangerously insane; his party is aggressively pursuing anti-voting and anti-election measures in service of the lies and delusions; and as Rachel explained on last night’s show, it’s an open question as to what the former president’s most rabid followers will be expected to do as Trump maintains the idea that he’s the real president, reality be damned.

When a democracy and its institutions are under attack, it’s a mistake to look away, even when the attackers are ridiculous.

And it is indeed under attack, make no mistake — Tim Murphy at Mother Jones, also this morning, took a look at the real-world denial of the GQP, including this bit on the key difference between Dems and Repubs:

But the way this dynamic is unfolding on the left and the right is asymmetrical. Though you would not necessarily know it from listening to Gaetz, Obama is not in office.
Sanders and Ocasio-­Cortez are not angling for TV gigs; nor are they reducing the world of lawmaking to the kind of retrograde distractions that get you booked on Tucker.
They use their enormous social media platforms for civics lessons, offering behind-the-scenes glimpses of the legislative process and the work of movement building, in an effort to get more people invested in both.
You can buy the “Tax the Rich” sweatshirt Ocasio-Cortez wears when she holds court on policy and procedure on Instagram Live, but it is not the only thing she is selling.
She and Sanders are trying to make the online world more engaged with the real world, rather than the other way around, to advance an ambitious governing program.
It is a theory of change, of which clout and performance are merely a means, not the endpoint, of politics.
That is the opposite of the reductive nihilism of Cawthorn or Boebert, or the eternal stagecraft of Cruz.

Exactly, but with GQP states’ vote suppression bills/laws, lies about the ‘stolen’ election, and the memory-loss/denial of the insurrection/riot at the US Capitol building last January, create a terrifying dark hole in the future for this country. And remember, too, these are violent-prone, racist assholes who would rather people suffer than anything else, and really don’t care for anyone/anything outside their own place. A horror incoming.

However, this morning there was a slice of happy. Way-way-thanks to Tom Sullivan at Digby on posting a most-wonderful quote from Guy Saperstein, a noted civil-rights attorney (now retired) and Democratic donor, who gave a no-holds-barred take on the immediate future of the Republican party:

“They’re completely devoid of any agenda. They have nothing to offer the American people. They’re offering chaos and insurrection. They are led by lunatics like Marjorie Greene, Matt Gaetz, and Kevin McCarthy. They’re experiencing the biggest loss of party registration in party history. They are now running nine points behind Democrats, 49 to 40, and it’s going to get worse. They are divided by the biggest divisions I’ve ever seen in a political party.
They’re just a total mess!”

I so, so hope Guy is right — marvelous music to my pessimistic ears…