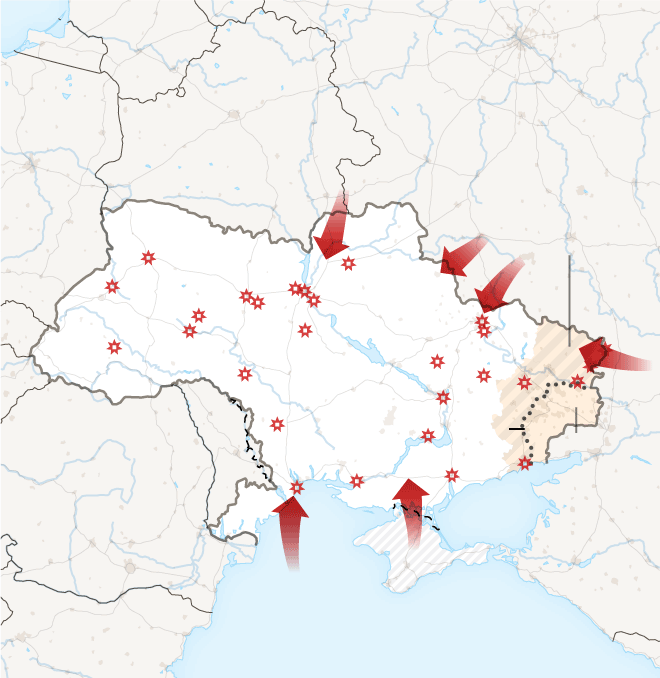 (Illustration from The New York Times earlier this morning).

As I type this post, I’m watching Joe Biden do his thing as all of us come to grips with a shitty, un-called-for war in Ukraine, and how Peter Doocy is a total asshole.
And now Biden’s finished — reporters are still shouting questions. I missed the opening of his speech as a Leroy walk rook place and the press conference was already well along by the time I arrived back home.

There’s plenty of coverage — I don’t usually don’t cable-TV news watch, though, I’m tuned into CNN right now, a panel with Jake Tapper — and the main point, it appears:

Biden: "The US will defend every inch of NATO territory with the full force of American power … there is no doubt that the US and every NATO ally will meet our Article 5 commitments, which says an attack on one is an attack on all." pic.twitter.com/028NQOV9nA

The president announced the U.S. will impose sanctions on four of Russia’s largest banks, in addition to two financial institutions the U.S. sanctioned earlier this week, meaning “every asset they have in America will be frozen,” he said.
The U.S. and Western allies are also imposing new export controls, which Mr. Biden said will block more than half of Russia’s high-tech imports and strike a blow to Moscow’s military and technological capabilities.

NATO will convene a summit Friday to bring together the leaders of 30 allied nation to map out their next steps, Mr. Biden said.
Still, the president emphasized U.S. forces “are not going to Europe to fight in Ukraine,” but to defend and reassure NATO allies in the region.

“Let me say it again: Our forces are not — and will not — be engaged in the conflict with Russia in Ukraine,” Mr. Biden said.
The president told reporters he has “no plans” to talk to Putin. He did not answer why the U.S. isn’t sanctioning Putin directly now.

Pretty unknowingly and ominous. Last night when the news swept the IbterWebs there was a feeling I hadn’t experienced in nearly 19 years (19 March 2003) and the “shock and awe” of the Iraqi invasion — a sense of dangerous mystery with the inflection of a bad, brutal ending. However, in this particular case in 2022, there’s another villain and it’s not a US presidential administration — instead of GW Bush and his lunatic gang, there is another lying, unhinged asshole with nuclear weapons, Vlad Putin.
After news reports last night with the sound of war in the background, most of the footage right now is a quiet reflection of what could be happing in the outer sections of Ukraine — understand Russians have taken some airports and air bases (one CNN report this morning included note journalists didn’t know the difference between Ukrainian military and Russian in the taking of a military installation near Kyiv). Currently, a slow roll to actual news and more on background, analysis, and history to fill the void in actual hostilities.
A stage that’s good, if it continues and Putin can control this shit from getting any more frightful.

However, side consequences are unknown shitty — from The Washington Post and history blow-back:

Ukrainian authorities said Thursday that Russian forces have captured the abandoned Chernobyl nuclear power plant, the scene of a 1986 meltdown that sent a radioactive cloud over parts of Europe and left a no man’s land of contaminated soil and other fallout, which remains dangerous.

“The Chernobyl zone — the exclusion zone — and all installations of the Chernobyl nuclear power plant have been taken under control of Russian armed groups,” Ukrainian Prime Minister Denys Shmyhal said in a televised statement. He said no casualties have yet been confirmed there.
…
The Ukrainian Foreign Ministry, recalling the catastrophe that ranks as the world’s worst nuclear power plant accident, said the Russian attack “may cause another ecological disaster.”
If the war continues, it said, Chernobyl “can happen again in 2022.”

There was no immediate way to confirm what Russian forces were doing in the zone, located about 80 miles north of Kyiv and 12 miles from the border with Belarus. Russia massed forces in Belarus in the weeks leading up to Thursday’s attack on Ukraine.

If artillery hits the facilities, “radioactive nuclear dust can be spread over the territory of Ukraine, Belarus” and European Union countries, he warned.

Also, an item straight at Vlad and his nutcase fantasy of a Russia/Soviet empire he wants to re-establish:

For Russia, the site may hold particular significance, since the accident there 36 years ago led to social changes and new cooperation with the West that transformed the Soviet Union.

Former Soviet president Mikhail Gorbachev later suggested that the Chernobyl disaster was “perhaps the real cause of the collapse of the Soviet Union” — more so than his liberalizing reforms.

War waged in this fashion almost always leads to disaster and catastrophe for a shitload of innocent people.
Is it worth it — good for nothing:

Despite all the shit, once again here we are…