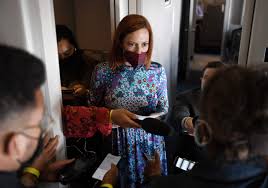 Journalism in the nowadays appears a whiplash occupation, especially coming off the terrible T-Rump news-coverage days, and apparently now the media is working toward getting a handle on Joe Biden’s low-key approach, while at the same time seeking how-on-earth to cover the weird-ass antics of the Republican party.
And in that new reporting reality, also attempting to let loose the ‘bothsideism‘ that’s plagued real journalism for years. Currently, it’s way-obvious there’s no such shit.

As an example, Kevin McCarthy’s horrible flip-flop this morning:

One party has completely lost its mind https://t.co/qml8QwmUW4

Despite shit like that, DC media is groping with itself creating a whatever-function point to cover Biden’s administration, using the crazy-ass GQP as a moving testimony to the supposed faults in Joe’s work in the Oval Office so far — and they’re f*cking it up.
Eric Boehlert’s PressRun this morning examined Biden coverage, and found it near-ludicrous in its pitched angle:

Singing from the GOP chorus once again, the Beltway press is certain President Joe Biden is careening towards trouble because of “the flurry of crises he is suddenly facing” (Washington Post),” and the “barrage of major challenges” that loom (Politico).
The doom-and-gloom takes are everywhere.

The administration is “struggling to find a clear narrative.”
“Multiple Crises at Home and Abroad Provide a Reality Check for Biden’s White House,” a CNN headline declared, while NBC’s “Meet the Press” announced, “Biden Battles New Crises as Honeymoon Fades.” And from The Hill: “The Imminent Crises Facing Joe Biden.”

After a wildly successful first 100 days in office, Biden is riding high in the polls. But instead of touting his victories, the press seems eager to paint a portrait of a presidency on the brink, nervously confronting “crises” and “chaos.”
As one reporter recently asked at a White House briefing, “Does it suddenly feel like the external world is turning on you guys?”, the implication being that the Biden White House is just now facing public policy emergencies.

Also, “chaos” compared to what? A pathological liar president who was also clearly unstable and spent his final three months in office waging war on free and fair elections in this country?

This new bad-news storyline represents GOP messaging filtered through the Beltway media.
The Washington Post over the weekend dedicated an entire news article to Republican leaders claiming things like, “The world is increasingly engulfed in chaos on Biden’s watch.”

Journalists though, often overreach while trying to construct the new narrative.
In an effort to paint a dire picture of mounting “crises,” several pointed to the already-fixed Colonial Pipeline shutdown from last week as proof Biden is staring into the abyss and facing “new” calamities.
…
The answer seems to be that because Biden posted such a huge win overseeing a vaccination rollout that became the envy of the world and has the country of a brink of returning to coast-to-coast ‘normalcy,’ the press is gaslighting the whole chapter of his presidency.
In other words, the pandemic didn’t really count. But violence in the Middle East? Now that’s a presidential disaster.
…
Biden remains the most popular president among Democratic voters in the history of modern polling. But the press doesn’t care much about that. It’s more interested in parroting GOP rhetoric about “crisis” and “chaos.”

One unusual bright spot this past weekend was Upchuck Todd’s interview with Ben Crenshaw on Meet The Press, where he took the asshole Crenshaw to the real-journalism cleaners — it’s rare, especially from the likes of Upchuck. Way-infrequent to take Republicans to task on all the f*cking lying.
The so-called Beltway Media (or MSM, maybe) have given Biden a near-cynical slant in coverage since day one. End of April, Pew Research Center released a study on the press workings for Biden’s first 100 days, and it’s warped — some points:

And Biden stories were also personal: ‘Overall, 65-percent of the stories were framed around the new president’s policy agenda and ideology, compared with 35-percent around character and leadership.‘

Journalists at least right now have a way-great guide for their coverage — Press Secretary Jen Psaki, whose abilities have caught some White House reporters with their pants down (metaphorically speaking, or maybe with Fox News dim-wits, not so) and has re-cycled forth with the of-late unused idiom of ‘truth.’ Or sometimes, instead of dodging questions, telling reporters her now-well-known catchphrase, “We’ll have to circle back,” on whatever the particular inquiry. And she does just that.

And today, more of the same during a press ‘gaggle,’ which be: ‘(US, journalism, politics) An informal off-camera briefing given by a spokesperson or politician. (rare) A noisy crowd of journalists.‘

Even in the air — via rhe Guardian‘s live blog this morning:

Psaki began the gaggle by noting that the president’s trip is meant to highlight the need to invest in the electric vehicle sector, but reporters’ questions immediately turned to Biden’s response to the attacks between Hamas and Israel in Gaza.

A reporter asked Psaki if Biden insisted that a ceasefire happen immediately when he spoke to Israeli Prime Minister Benjamin Netanyahu yesterday.

The press secretary replied that she would leave the description of the conversation to the readout released by the White House yesterday, which said Biden “expressed his support for a ceasefire and discussed US engagement with Egypt and other partners towards that end”.

“The president’s objective is clear, which is that he wants to see an end to the violence on the ground,” Psaki said. “He’s been doing this long enough to know that the best way to end an international conflict is typically not to debate it in public.”

She added that sometimes diplomacy “needs to be quiet” to meet the objectives of those talks.

Psaki’s comments come as Israeli airstrikes and Hamas rocket attacks continue in Gaza, where more than 200 people, most of them Palestinian, have already been killed in the violence.

A normal, easy-go press ‘gaggle’ on Air Force One — you’ve seen it a shitoad times. And until 2016, took them for near-granted. In that above-mentioned ‘whiplash’ in journalism is measure of media in reporting on the huge black hole that’s the Republican Party, an entire clan of liars, and nasty anti-democratic assholes.
How to ‘both-sides-do-it’ when one side is undeniably bat-shit nuts?

Boehlert once again handles the chore in his PressRun from last Friday — journalism is suffering the American people:

In normal times, if the public sacking of Cheney for lack of fealty and the public support for insurrection had happened in the same calendar year it would be been considered a shocking turn of events for a mainstream political party in this country.
The fact that both events happened within hours of each other this week only highlighted how radical, dangerous, and anti-democratic the GOP has become, as it hurtles far beyond the mainstream and into the abyss.

Unfortunately, the Beltway press has no idea how to cover this story. It still refuses to use the proper tools and language to put the troubling actions of the GOP in context via its straight news coverage.
Hiding behind Both Sides journalism, timid language, and purposeful naïveté, news outlets still aren’t being honest about the dire threat Trump Republicans now pose to the country.

Watching the party maneuver itself to be able to invalidate future elections — by passing voter suppression laws, installing local election boards that refuse to certify wins, empowering state legislatures to refuse to certify their state tallies, and electing a Republican majority in the House of Representatives that deny the Electoral College count — means the United States faces the most entrenched, internal political threat since the Civil War.
That’s no exaggeration, considering the defining loyalty test for the GOP today is backing Trump’s claim that the 2020 election was stolen, which in turns positions the party to question all future election results.
…
The Beltway press has never had to cover a political party that openly embraces anti-democratic policies, such as undermining free and fair elections in America.
It’s a defining media challenge.

We’re in perilous times.
However, I hope it’s not representing futility;